Firstly, Pole Infinity thanks all who provided support, words of encouragement and votes throughout the (short-lived) Instructor of the Year voting process. For Karen to be consistently in the top four out of 99 nominees globally, demonstrates how highly Karen is regarded and how much impact the Studio has had on its students (and beyond!)

Unfortunately, the competition did not reach a conclusion. Yesterday would actually have been the final day of voting with the results announced. All Karen’s supporters are certain that she would have won, especially if we assume that others, at the top, weren’t all ‘playing fairly’. All votes for KB were genuine and heart-felt, everyone recognising that Karen would be incredibly deserving of this award. I can’t imagine another instructor who sets such a good example, is so self-less with their time and so encouraging of her team and her students.

You may have been lucky enough to hear a few of the Infinity girls on the radio last week! The intention of the interview may have changed, but Karen, Amber and some mysterious ‘Tina’(!) did a great job at representing the Studio. After a bit of a shaky start, the POLE INFINITY representatives got their message across – Karen expertly explaining the brilliant work she does, particularly in relation to the Recovery Programme, and Amber telling her emotive and powerful story. I think we all agree that the ladies should have had a lot more time in the interview studio (and I think the staff were scared of accommodating too many pole girls with access to a microphone at the same time! KB did threaten to do a drop-back on the presenter…)

I don’t blame them for being concerned – You know there’s going to be mischief when Marianne Mc gets a cheeky glint in her eye. Using her persuasive skills, she nearly managed to inflict a health and safety nightmare on the unassuming receptionist. The girls settled for a slightly safer spontaneous photo, perfectly-timed!

Marianne and Amber are just two of the women who Karen and the Studio have helped. Both of these sparkly, shining stars have become such brave, strong, inspirational, fabulous ladies. Keep shining!

World domination is still within reach…!

One thought on “Keep reaching for the stars” 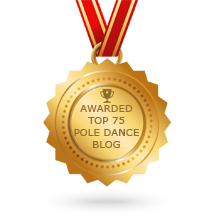